David Attenborough must be the only person who can appear on national television to tell us that we are all doomed, probably past the point of no return, that species are dying and the climate is boiling over and yet everybody still loves him. “Unfortunately, you’re all done for,” is what I took from his programme Extinction: The Facts on BBC One earlier this month; still, didn’t it feel nice to hear it from a national treasure?

Similarly, the words “this is my first time on Instagram” are not always a reason for optimism, but Attenborough joined the platform on Thursday, at the age of 94, and as a result he began trending on Twitter. (I have said it before, but when a certain name trends, it can provoke a brief moment of anxiety; in this case, it caused a sharp and thankfully unnecessary intake of breath.) In his first video, which is racking up likes more quickly than a picture of an egg, the presenter doubles down on his Extinction message, using a new platform to impress a sense of urgency to a presumably younger audience. “As we all know, the world is in trouble,” he explains, sombrely, promising to post more videos with suggestions of what we might do about it. It will all accompany his new film, A Life on Our Planet, in which he will dangle a glimpse of hope.

In the Radio Times, Attenborough discussed the consumption of meat, explaining that the planet cannot sustain meat eating at current levels. But he also admitted that he eats chicken and fish “and my conscience does trouble me”. “I’m affluent enough to afford free range, but it’s a middle-class hypocrisy.” I may be swayed by his innate persuasiveness, by the fact that he could recite the lyrics to Cardi B and Megan Thee Stallion‘s WAP and still make it sound both authoritative and convincing (as if it wasn’t already), but I think admitting to individual hypocrisies is honest and can be useful. When it comes to the environment, few if any of us can live unimpeachably, but those who want to do something strive to do what we can. We try and we try harder. Impossible standards can be damaging; surely realism is more effective. This is a lesson that could be taken from last week’s Bake Off, too, as the cake-based busts of the bakers’ heroes, including one of Attenborough, started to crumble under the pressure. As Cake David gently toppled from its plinth, it was clear that even he needed a lie-down in the end.

Zendaya: an Emmy ‘upset’ to be cherished 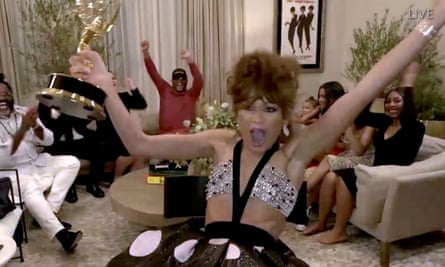 The Pandemmys, as this year’s audience-less Emmy awards were wittily dubbed, set a new record for the least-watched ever, as hundreds of thousands of viewers declared that they had seen enough celebrities mucking around on Zoom to last them a lifetime, thank you very much. Even so, what has been a terrible year for the world has still produced some excellent television and this deserved to be rewarded. So everybody involved gave it a good go, just like the orchestra on the Titanic.

One of the shocks of the night was the triumph of Zendaya, who received the Emmy for lead actress in a drama. She was astonishing in Euphoria as Rue, a teenager with a drug problem experiencing a mental health crisis. It was not a shock in the sense that she hadn’t earned it, as some fans thought when they read the New York Post headline about this particular “upset”, but it was a competitive category, stuffed with award magnets, and her victory made her the youngest ever recipient in that field. It was the best kind of non-upsetting upset there is, and her speech was flabbergasted. “There is hope in the young people out there,” she said, before remembering that Euphoria is an often harrowing drama that makes anyone over the age of 19 desperately grateful they are not a teenager any more. She hastily added: “I know that our TV show doesn’t always feel like a great example of that.” It was a moment of pure sweetness, matched only by the sweeping send-off given to Schitt’s Creeek, which is as cheering as Euphoria is bleak and demands a marathon-watch immediately.

A plinth for Partridge? How fitting 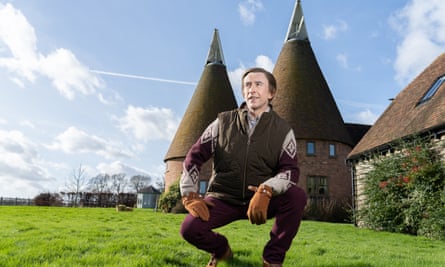 I find it hard to believe that anyone visiting Norfolk for the first time is not thinking of Alan Partridge somewhere in the back of their mind, so the arrival of a statue of him in Norwich is an apt and, some might say, long overdue monument to his cultural impact. A bronze figure of the Steve Coogan character, standing tall, hand on thigh, appeared in the city like a gift from above, though it was actually the work of sculptors and Partridge fans Nick Dutton and Gavin Fulcher.

The pair had to deny that it was a publicity stunt for the new Partridge podcast From the Oasthouse, explaining that they had been working on the statue for three years in their spare time. I know they’re professionals but, in the great pantheon of bronze statues, it certainly does the job: better than the original Ronaldo, less provocative than the recent Melania Trump “tribute”, up there with Ken Dodd. “It was just a bit of fun really,” Fulcher told BBC News. “I think, during this time, we could all do with a bit of light relief.” It is also a rare case of a statue uniting people in 2020.

Big Oil’s answer to melting Arctic: cooling the ground so it can keep drilling

Tree of the week: the beloved Scots Pine that could fall victim to its own success

Rising tide: why the crocodile-like gharial is returning to India’s rivers

China Data On Tap For Monday